For non-runners reading this, DNF means Did Not Finish. In my preview post I ended with “Let’s see how I do. Particularly when the rain comes in at night.”

On the plus side, the rain came in during daylight hours. But I’m getting ahead of myself. Let’s go back to the start.

To get you in the mood here are some great videos about the Kerry Way Ultra.

First up is Eileen talking about the history of The Kerry Way Ultra:

Next some compilation videos of various parts of the course:

I don’t have any deep thoughts here. I’m not running away from anything or running towards anything. I never finished Haruki Murakami. If I’m having a mid-life crisis, it’s a bit late. I just love running (ok ok jogging) and I love the trails.

KWU gave me a chance to spend an enormous amount of time out there with my shallow thoughts, enjoying some of the best views on the planet, and sometimes dealing with a bit of temporary discomfort. 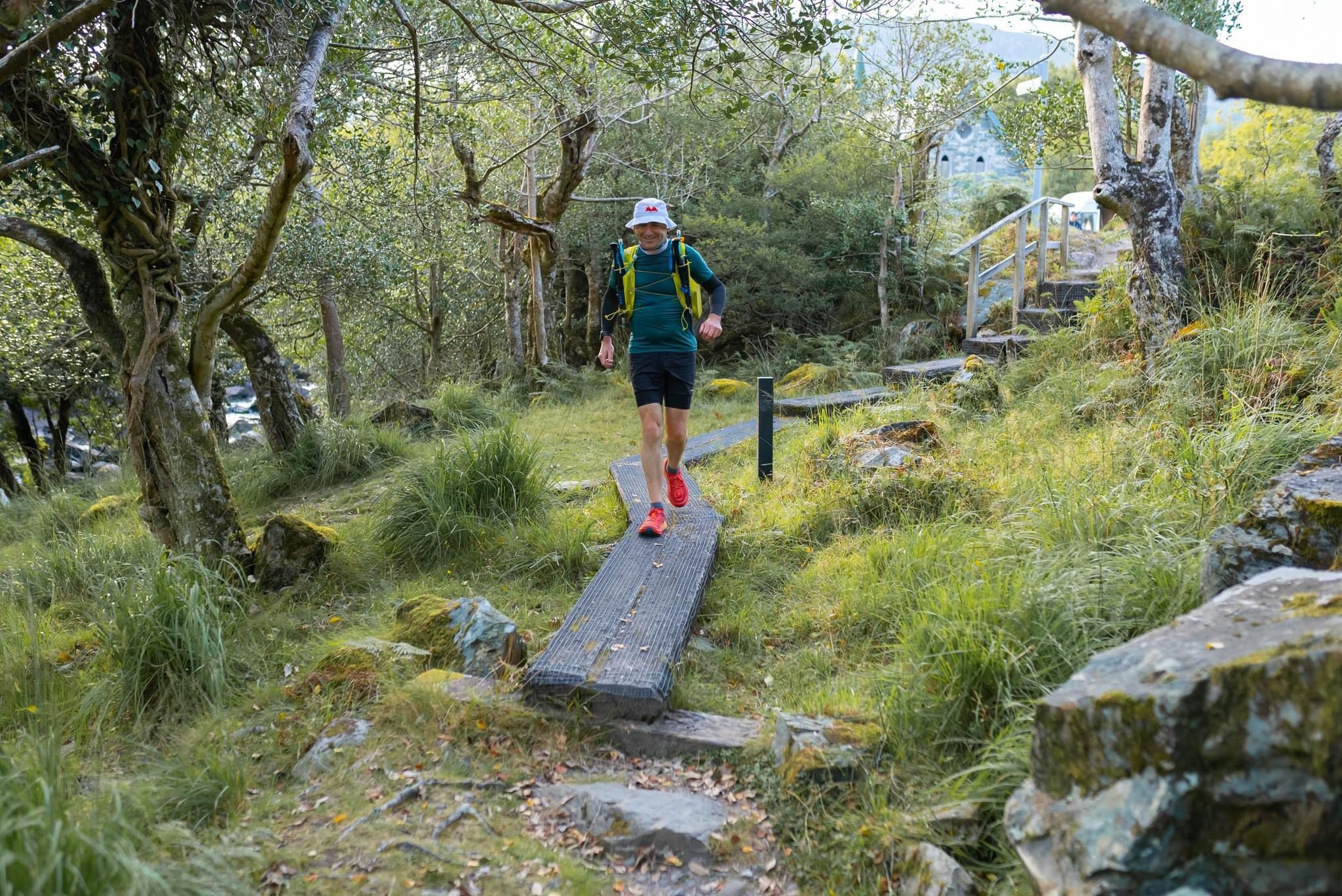 Seeing how far this old bag of bones can go is also intriguing for me.

I’m much more inspired by the John Kelly view of ultrarunning than the hoo-hah king-of-pain nonsense you sometimes see associated with it. All of the ultrarunners and mountain runners I look up to seem like the most humble normal people who just like running far.

What I screwed up

A few core things were the reason I had to DNF. They were so utterly simple, stupid and easy to avoid. It’s infuriating!

Between the leg pain and rain, my speed collapsed and my temperature plummeted. I trudged through the forest before Templenoe, knowing I was done. I had lost the ability to visualise myself at the finish line or even visualise myself in Kenmare. At the spur in the track that went up to the hostel on the N70, I called my wife to come get me. She made sure I was sure. I was. We let Eileen know my race was over and back to Killarney we drove.

Should I have DNFed?

I have asked myself this question a thousand times. If I had knuckled down, could I have done it? If I had gotten to Templenoe, changed all my clothes, switched back to a heavy jacket and base layers and taken a bunch of painkillers, might I have recovered my pace sufficiently to get to the end (either in time, or at all)?

I’ll never know. The only things I do know are that the rain got worse and barely let up for hours. And 6 days later my left leg is still in quite a bit of pain. There’s also the small issue of the large red swelling that appeared on my shin and which was diagnosed the following day as cellulitis (bacterial infection of the skin). So I spent the week on antibiotics.

I’m very disappointed I didn’t finish whilst simultaneously being over the moon that I covered 150km on foot with only a sore leg to complain about. I’m also chuffed how the rest of my body is in amazing shape after a few days, at the age of 54.

I can’t end without mentioning Yvonne Walsh and Eoghan O’Neill. I knew Yvonne was going to podium even if she didn’t. Her down-to-earth approach to everything is an inspiration. And Eoghan, holy shit, we all saw that video last year. Now that’s a comeback! 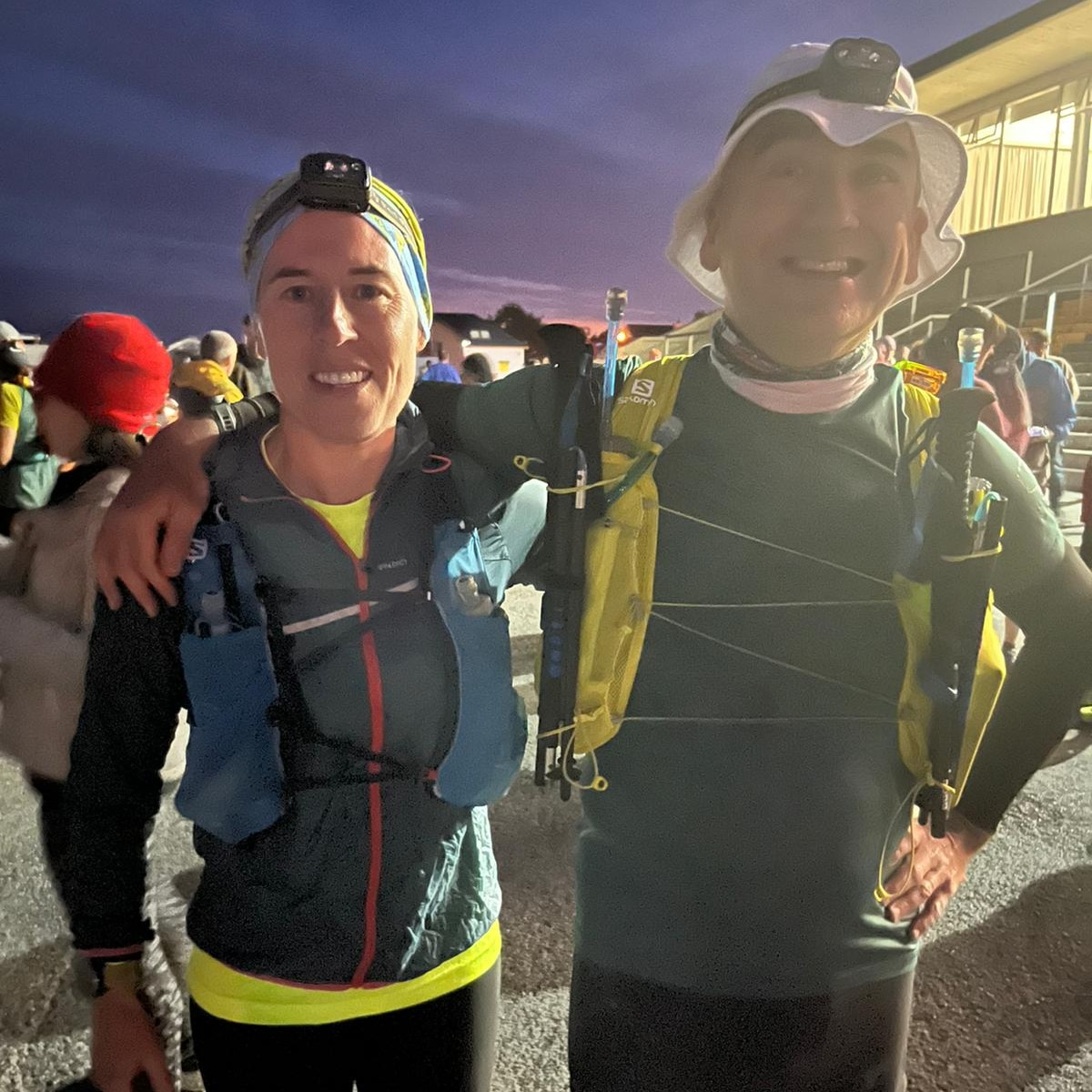 Hell yes. Training starts as soon as this tendonitis eases off.

Hopefully this is useful for someone thinking of doing KWU. By the time I got to the start line I had reccied the entire course except for 2 miles before Sneem. I had covered many parts multiple times in recent months, including that one solo 100km recce from Killarney to Waterville. So I wasn’t just ready, I knew where all the gotchas were and kept my wits about me not to go off-course. But of course that’s impossible if you live abroad. So here’s just a few short descriptions of how I view the course as a back-of-packer.

The first section is a doddle (or to use formal language, a piece of piss). From the racecourse on footpaths to the touristy bit of the National Park and up to Torc is easy. There’s a a bunch of steep steps at Torc and then you are on to the Old Kenmare Road which varies from gritted path to some lumpy bits. After a few miles you reach a T-Junction. Do not go to Kenmare. Make sure you know the names of the main towns/stops. I met one guy who was standing there, not knowing which way to go. Turn right and you’ll soon cross the N71 and then have more of the same easy terrain all the way to Lord Brandon’s Cottage. The only things you need to worry about are hydration if it’s hot, and mozzies.

This section messes up a lot of people. And if you only recce the initial parts you’ll get the wrong idea. Start with mostly uphill roads for a few miles. Then easy off-road. Some light scrambling and steep up/down on rocky terrain before you reach the road again. You think it’s going to be road from then on. Oh no no no. After a mile or so, vertical up the side of a mountain to the highest part of the course, followed by steep rough slippy down. I’ve run out of water twice here. Then a fairly easy but long off-road single-track before you hit the road to Glencar. Any time there are similar signs pointing in two directions, you always want the simpler “Kerry Way” direction. So not the “Walking Route” or “XYZ Loop”.

This is one of the easiest sections. A mix of very easy forest paths and roads ending in a very steep slightly lumpy up and down through the Windy Gap.

A very short steep trek through the forest followed by several miles of boring hilly roads. Then my favourite bit of the course. A long fairly steep trek up above the Ring of Kerry. The views on a good day back to Rossbeigh Beach and Inch are some of the best in the world. Unfortunately this was when I hit torrential rain and brick-wall wind. Once you get to the top, it’s an easy undulating downhill on old track to the road. A few miles on road followed by a short trip past a bull(!) in a field and you get to Foilmore Community Centre.

The bit I’d dreaded for months. The bit I lost sleep over. The bit I’d effectively done 4 times but was still terrified of.

A gentle start leads to one of the big splits in the route. You do not go to Cahirsiveen in the KWU. That’s a spur. You go hard left off-road and up a very steep uphill. Then it’s viciously steep up and down on some very nasty terrain for what feels like days. If the weather is bad, this may break you.

Be incredibly careful with navigation. In my big recce I got turned around in the dark and ended up re-tracing most of my steps back to Foilmore. It nearly broke me. I was so tired, I even convinced myself that I hadn’t gone wrong and the Russians had hacked all the GPS satellites.

This time I had a compass/thumbpass and made sure I was always travelling between South and South East. Finally there’s a very steep rocky track down into a farm and on to the road for a few miles to Mastergeehy.

But it’s not over.

Make sure you don’t miss the turn here as you’re about to deal with more awfulness. A very steep track up to Termon’s ridge. There’s a laughable “4km” sign there which some evil person has installed. I think it’s more like 14km. This is followed by a few miles of rough ankle-breaking terrain and knife-edge rocks. Then a never-ending but not very rough undulating route all the way to the road into Waterville. it’s more mentally hard than physically, particularly if it’s heading towards 2am like it was for me.

First few miles out of Waterville are on road. Then a nice easy single track which crosses back over the road twice. Stunning views during the day. This is a very mixed route with a very steep up and then undulating downs. Mix of grass, rocks, roads, forest and trails. Tiring but not particularly hard.

The first mile out of Caherdaniel is very steep and rocky. Then it spends a few miles on rough but ok terrain. There are a few road sections which your ankles will appreciate. Then a couple of very very steep ups which take it out of you. The downhills are fairly runnable. Eventually you’ll come to the main road. Do not go out on it. It’s very easy to miss the signs pointing down to a track which runs parallel to the road. This is a very easy section. Gentle up and down. Track, road and forest road. Finally a couple of road miles into Sneem.

This is the start of the Lite course. First few miles are a very easy mix of paths, roads and trails. Nothing too steep. Then there’s an exposed hill section which is fine in good weather (not so much in bad) followed by a short road section and then down into gorgeous woods at Blackwater Bridge. The views out to the water here on a good day are incredible. This leads to big forest roads almost all the way to Templenoe, with a few hundred metres on the main road.

This was the hardest section for me in the Lite last year. It’s several miles of constantly uphill road. If it’s hot, be careful with hydration. Eventually you get to the top and can run hard downhill on the road for quite a while. The off-road sections are relatively easy, if mucky, with one semi-rough rocky patch before Kenmare. Then the road into and through Kenmare.

The hill out of Kenmare is a heartbreaker. It’s long and steep but at least it’s on-road. You get a brief respite and then you are on to the Old Kenmare Road trail and it gets even steeper. You now have a lovely bunch of miles on a great trail. It’s wide, often lumpy, not remotely dangerous or particularly exposed and ever changing. And eventually you’ll come back to the T-Junction you were on many hours previously. You turn right and head back down into Killarney via Torc and the Park.

I completely overpacked extra clothes and shoes and food but I’m glad I did. It meant I never worried about not having exactly what I wanted at any crew stop. Here’s some of the more important elements along with some of the backup/unused things in the boxes.