I’ve always been interested in maximising the lifetime of electronics. I detest built-in obsolescence and I hate the way computers are becoming impossible to upgrade or repair yourself. Apple is the absolute worst culprit in this area and their actions result in others following their terrible example.

Apple’s logic is that phones and computers should be like TVs and no-one ever upgrades or repairs their TV. Except, we used to. I still remember the RTV Rentals man coming to our house to replace the tuner in our TV as the existing one couldn’t handle the signal of my new ZX Spectrum. 1970s/1980s TVs were modular so it was only a few minutes work. We need to go back to that.

At my most extreme, I recently upgraded the aforementioned 39-year-old ZX Spectrum to have HDMI-out. It has been loading games from SD cards for several years. 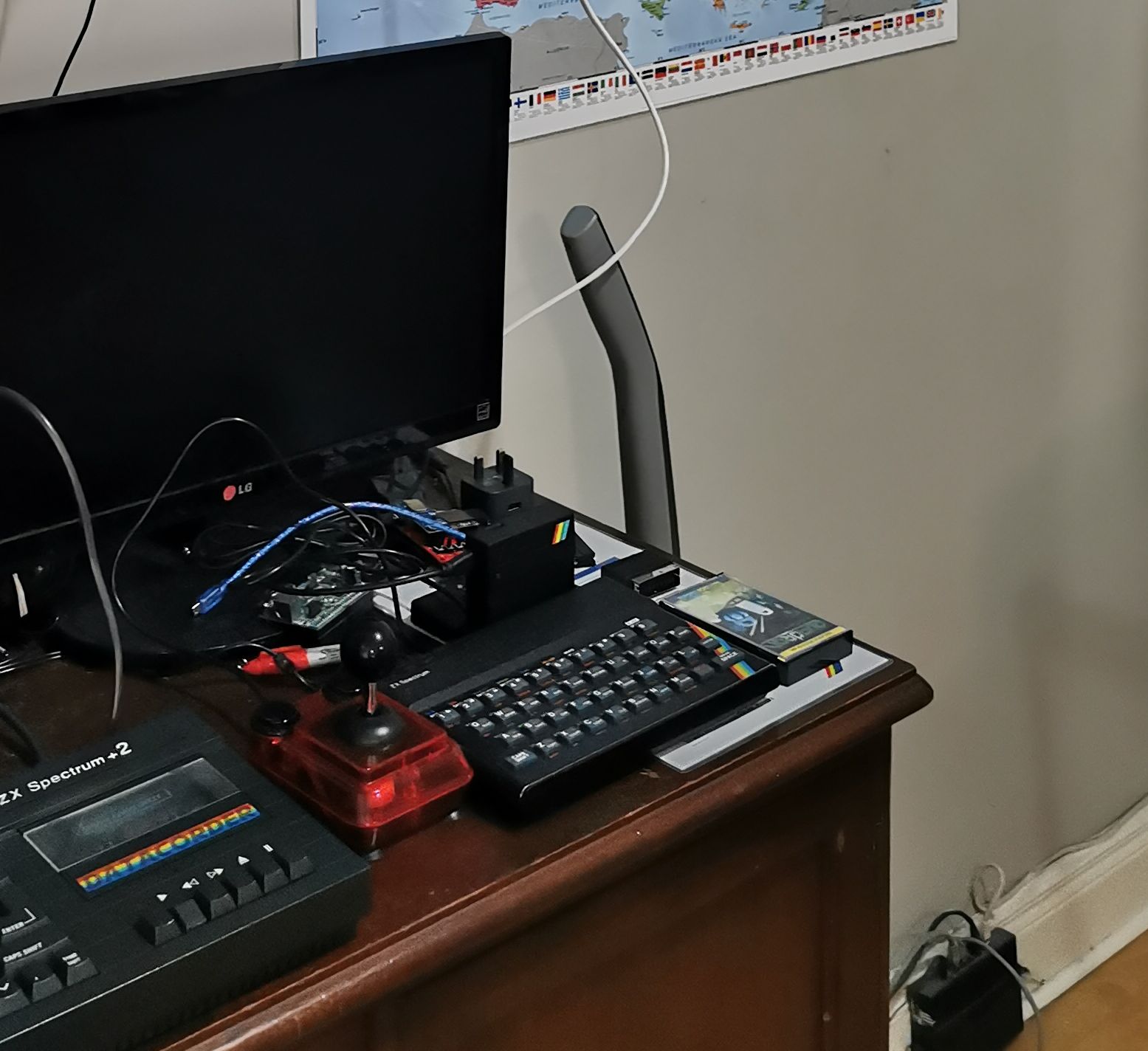 “Right to repair moves forward for your broken devices. But campaigners want to go much further”

I also love using cheap electronics to do powerful things. This is why I adore the Raspberry Pi and Arduino ecosystems so much. If you can imagine it, you can probably do it with a few Euro and some combination of those plus cheap modules from Aliexpress. Things I have built recently using this approach (and will blog soon) include a cloud-connected CO2 monitor and a cloud-connected oil tank monitor.

Related to this, one challenge I know many families have had during these pandemic lock-downs is access to computers for all their kids. Obviously the easiest solution for many people is to get a great Chromebook for approx €200 but not everyone can afford that.

How many of those people have smashed phones in a drawer that you suspect are still working? 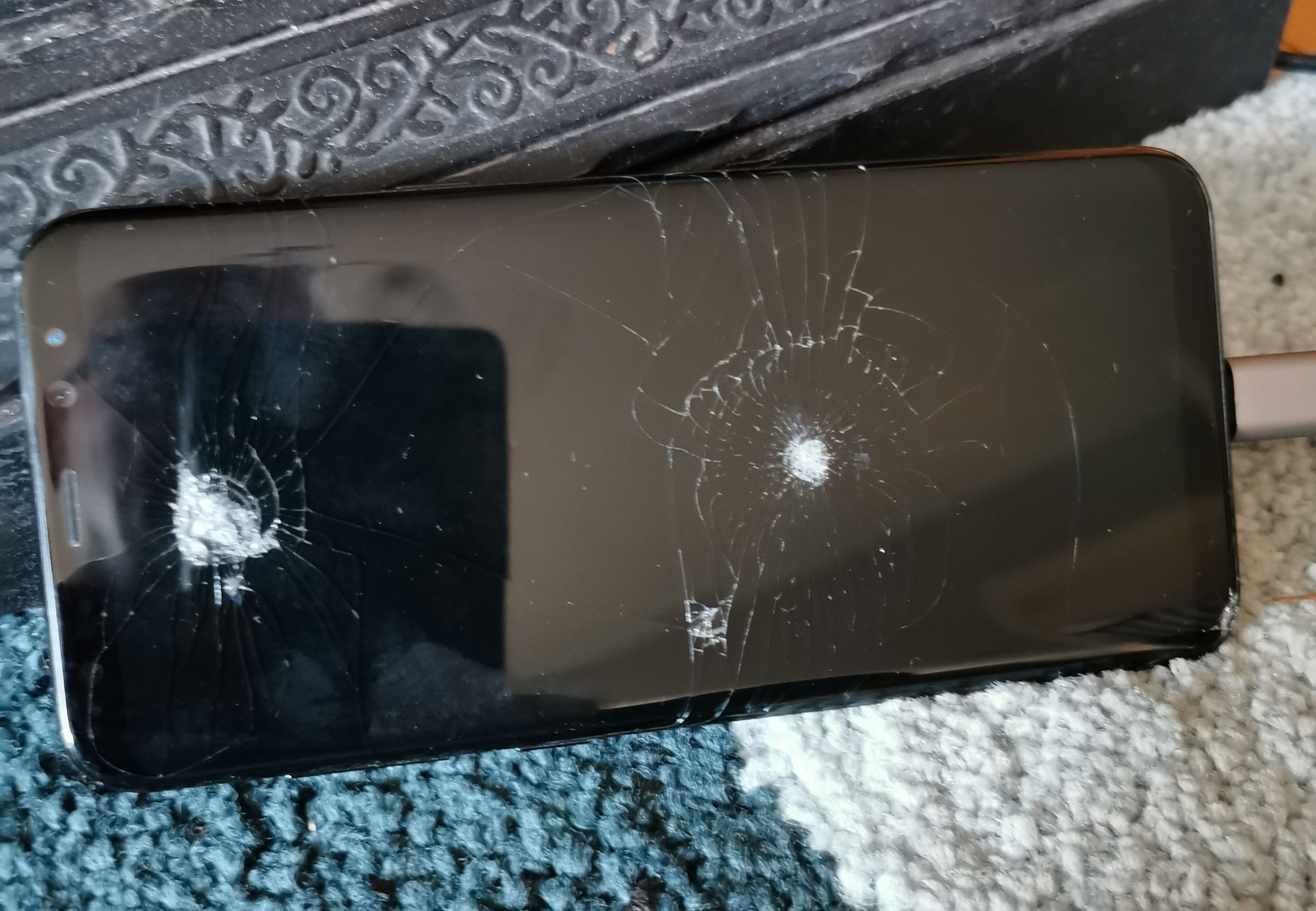 I have a completely smashed four year old Samsung Galaxy S8+. Its own screen mostly stays black but sometimes flickers on and off. I dropped it at the start of the Chicago Marathon in 2018 due to the exhaustion of Aer Lingus’s flight from hell. When I got home, I was informed that [a] Vodafone had never applied the phone insurance policy to the S8+ when I had upgraded to it so [b] It would cost €320 to get a new screen. After telling them politely to get fucked (seems to be a recurring thing with me and Vodafone), I promptly bought a cheap new Huawei Honor Play instead. Great phone. The S8+ sat in a drawer until I decided to try this experiment.

I’m pretty sure the vast majority of non-techie people don’t realise that any modern smartphone is a supercomputer in their pocket. And, depending on the model, is more that capable of being a desktop replacement for many common tasks. And I don’t just mean schoolwork. You could easily build an entire web application or website with this setup.

You have two possible approaches depending on the age and capabilities of your phone.

The easiest way requires a relatively modern Android phone with a USB-C charging connector. That’s the one which works either way around. I have successfully tested this with a two-year old Huawei P30 Pro and that smashed Galaxy S8+.

Literally all you need to do is to go to a site like Amazon UK or a store like Currys/PCWorld and buy a few things:

The cheapest decent Mouse/Keyboard combo I found on Amazon was this Asus U2000. It cost me £10.82!! Both keyboard and mouse are shockingly good. In the past I have also bought some no-name wireless keyboard/mouse sets for < £20 on Amazon and they have been pretty rubbish. But wireless is a little bit handier for a lot of people.

The cheapest good suitable USB-C hub I found on Amazon was this Ablewe 5 in 1 for £18.99. Again I was really surprised by the quality.

Note that the price of each item comes in under the new Brexity customs and excise limits. If you have (or know someone who has) Amazon Prime, definitely do it as separate free-delivery orders. 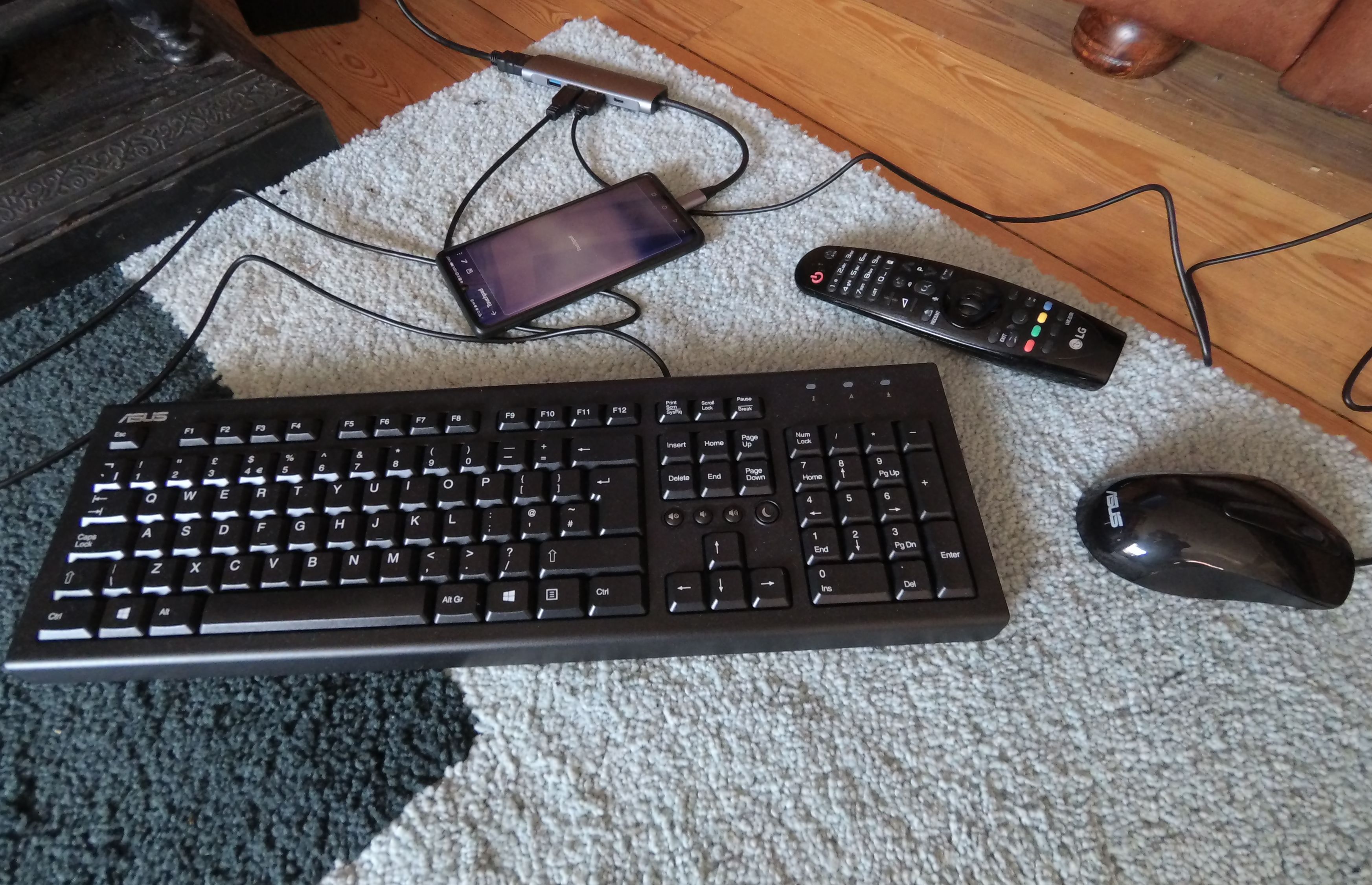 Some phones require you to pick an option in the display settings to use the external monitor but most will just immediately mirror their screen to the TV. Huawei phones have a fantastic desktop mode where everything on the TV is in full-screen and you get a Microsoft Windows type user experience. My Samsung S8+ is a bit crappier where all the apps fill the screen, but the main home screen doesn’t. A minor annoyance. 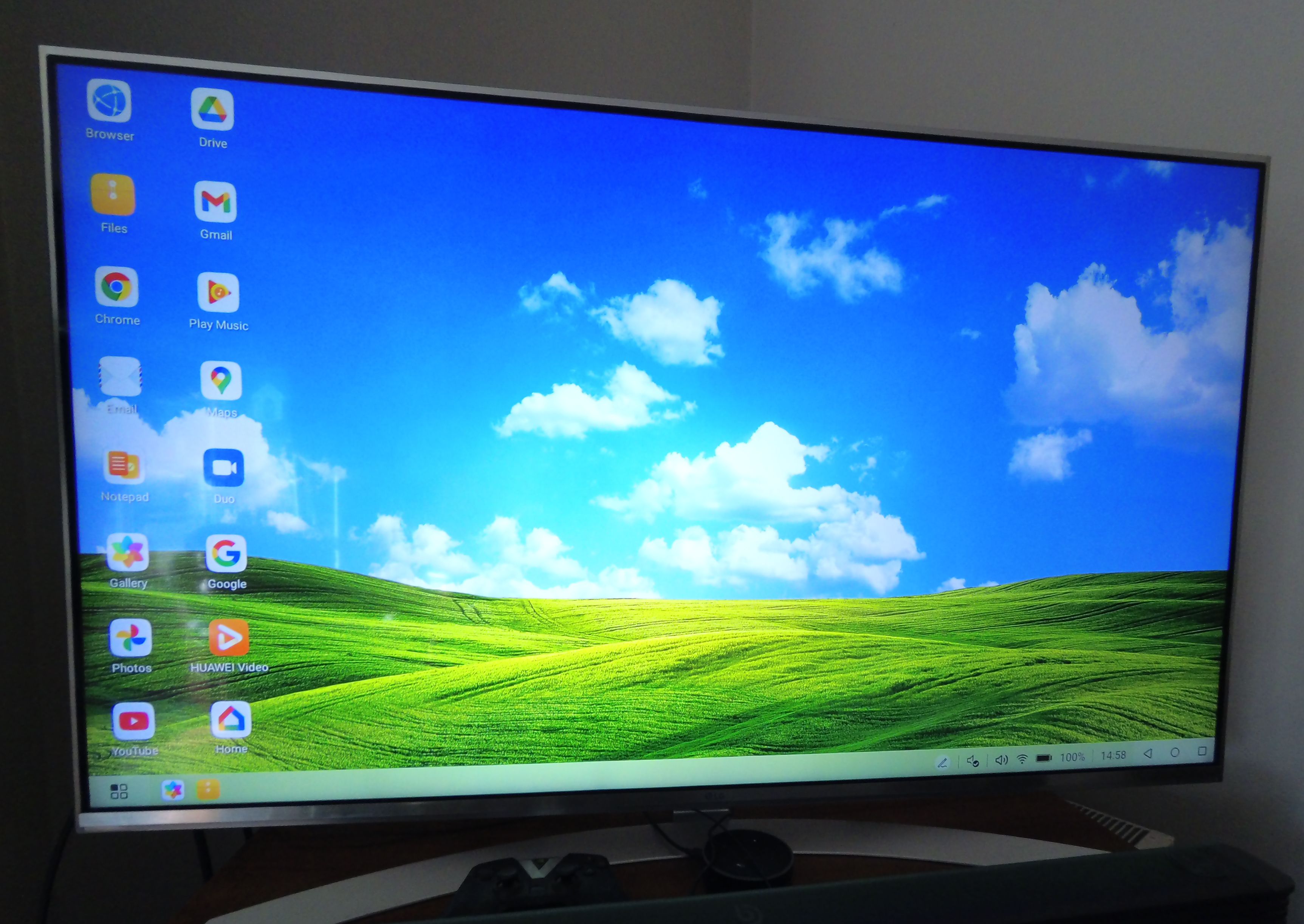 Yes, this does involve using your TV if you don’t have a spare monitor. But hey, my entire generation learned how to use computers this way!

Right, so you now have a supercomputer with a keyboard, mouse and screen, what can you do? Wait a second, I want to tell you about option 2.

If you have an older or cheaper Android phone that has a classic micro-USB charger (the type you always try to plug in the wrong way around), you might be in luck.

In this case what you need to do is:

Now that you have the display piece sorted, you need to get input working. On these phones, you need the following:

The two big drawbacks of this compared to option 1 are the screen mirroring, which can be slow, and the inability to charge the phone whilst you are using it.

Note I’ve tested this on a cheap <€80 Nokia 2.2 phone and it worked perfectly. 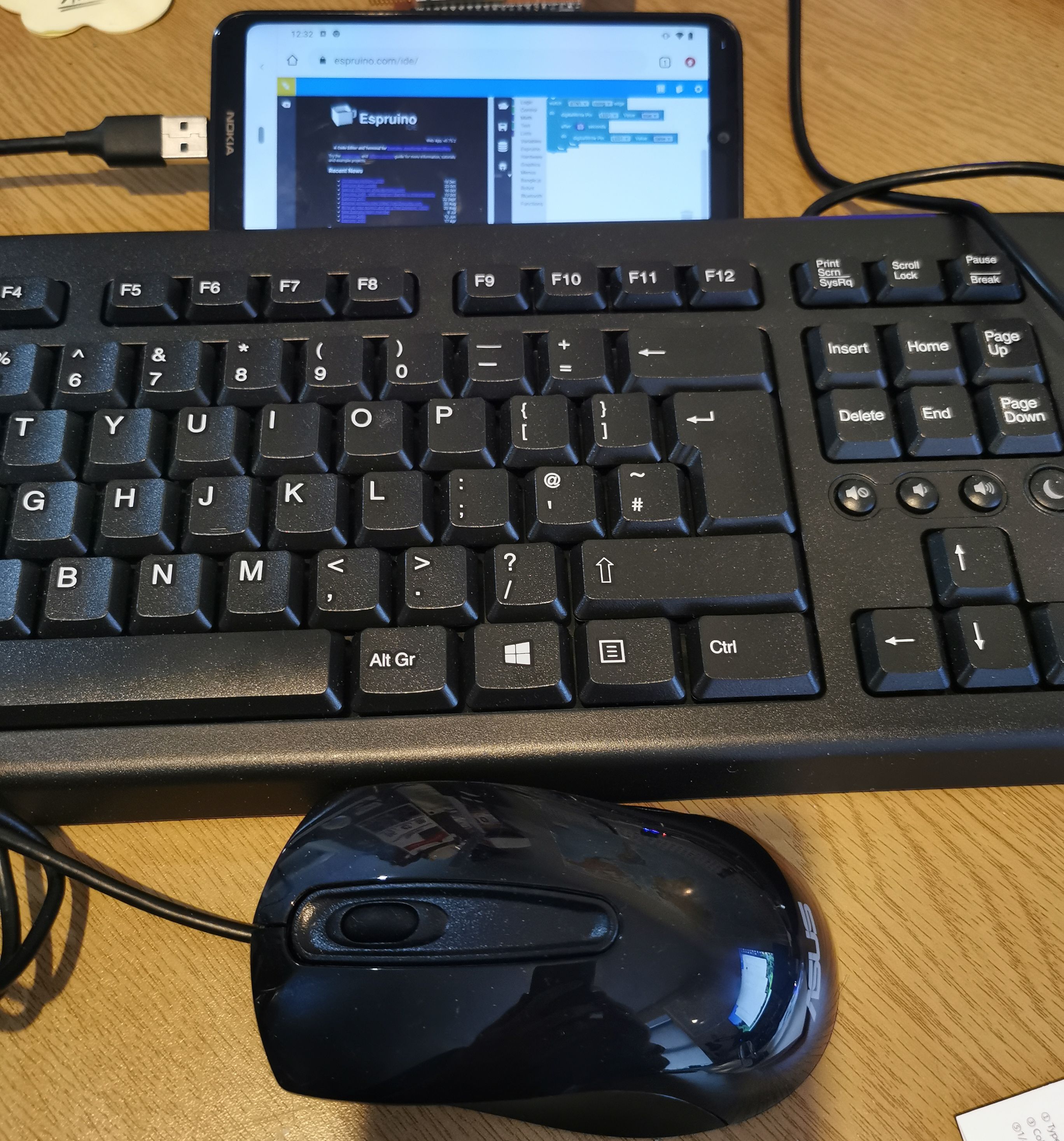 So back to the question, what can I do with this setup? Lots!!

Using your phone as a computer

The most obvious things you can do with the phone, now that it’s connected to a big screen and has decent input devices, are as follows:

So basically anything you normally do but a lot easier.

But wait, there’s more. An ever increasing number of software development tools and environments are now available in the browser. The days of having to install horrendous monstrosities like Eclipse are going away. This is just a selection for the curious and there are many more. 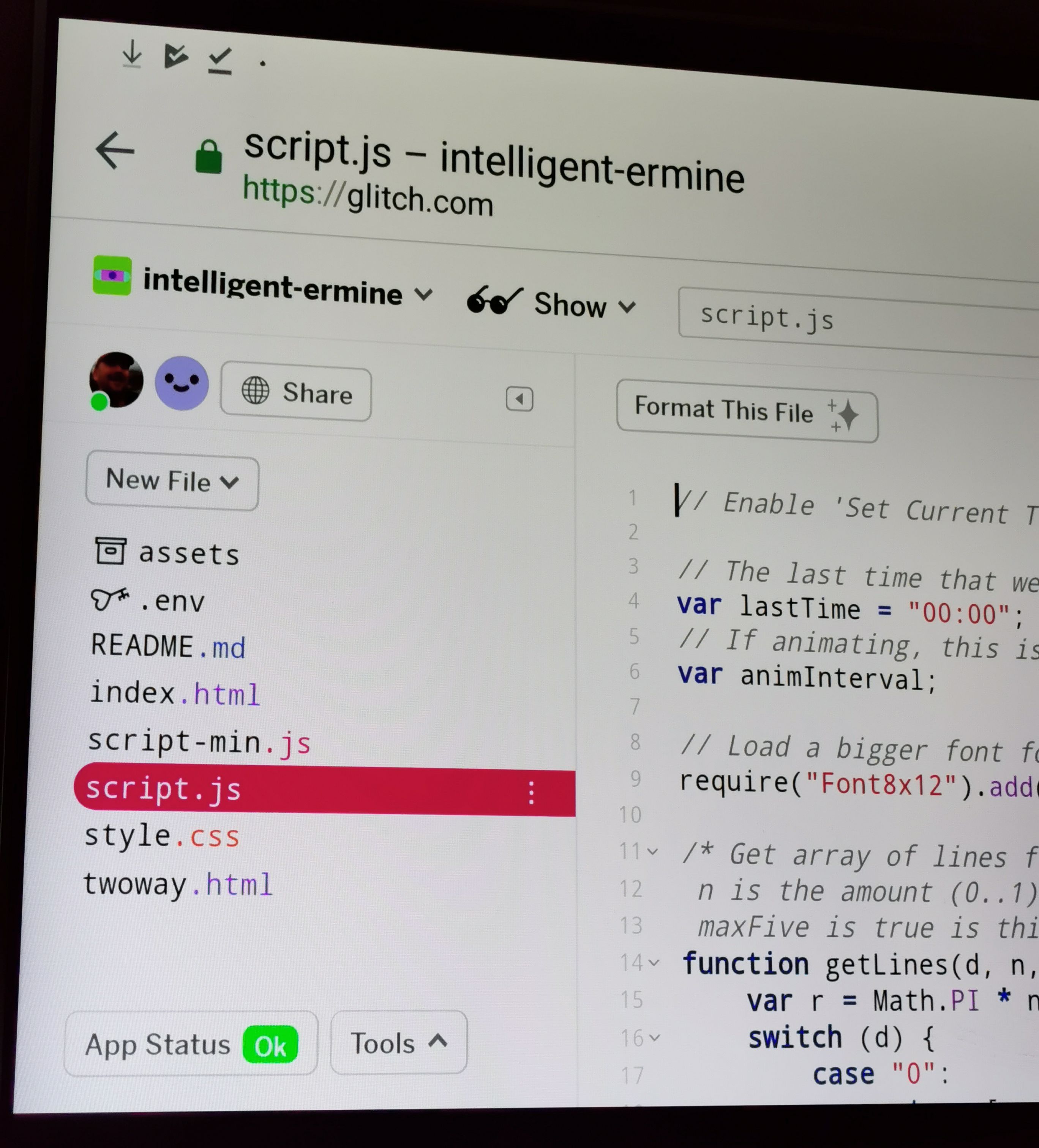 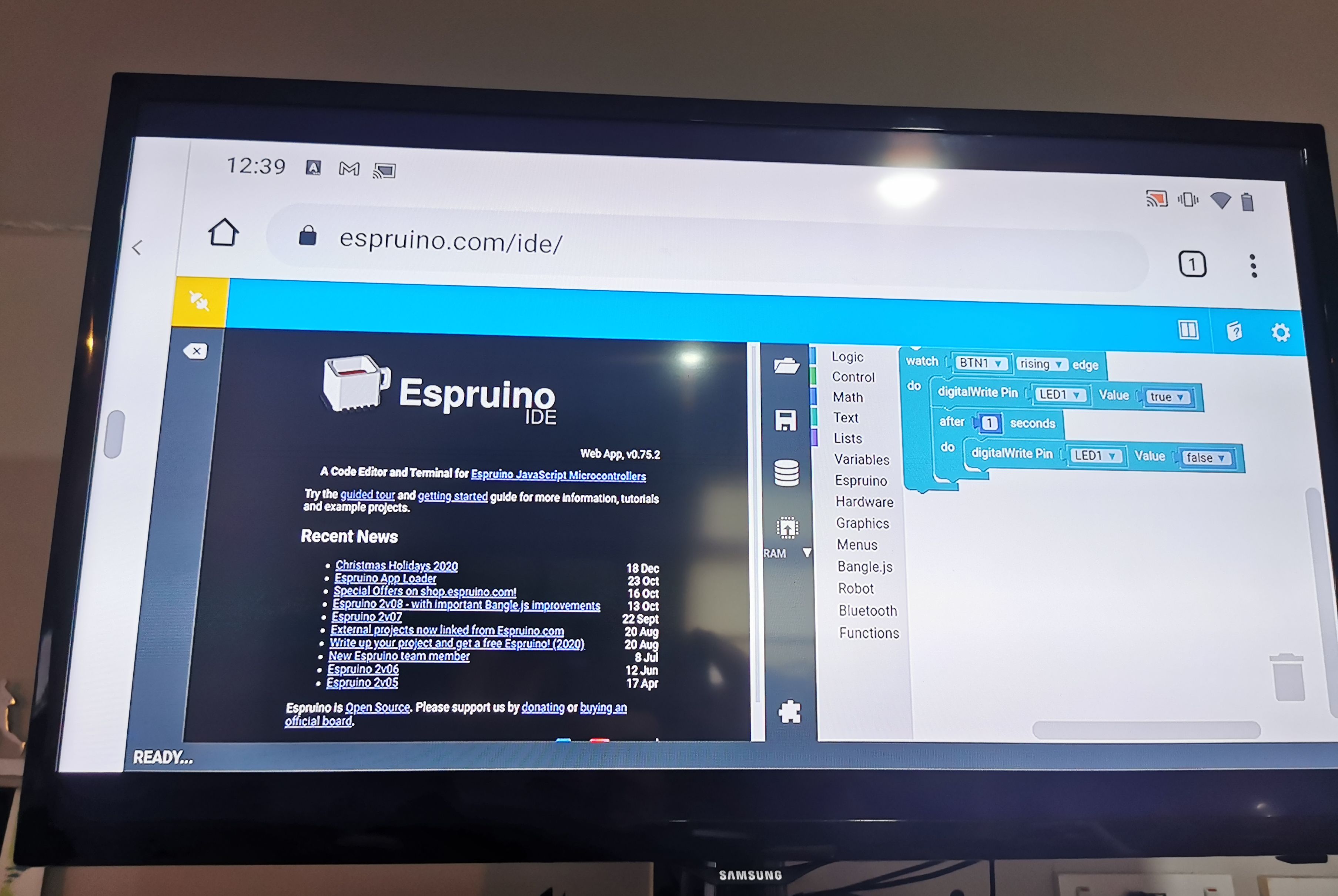 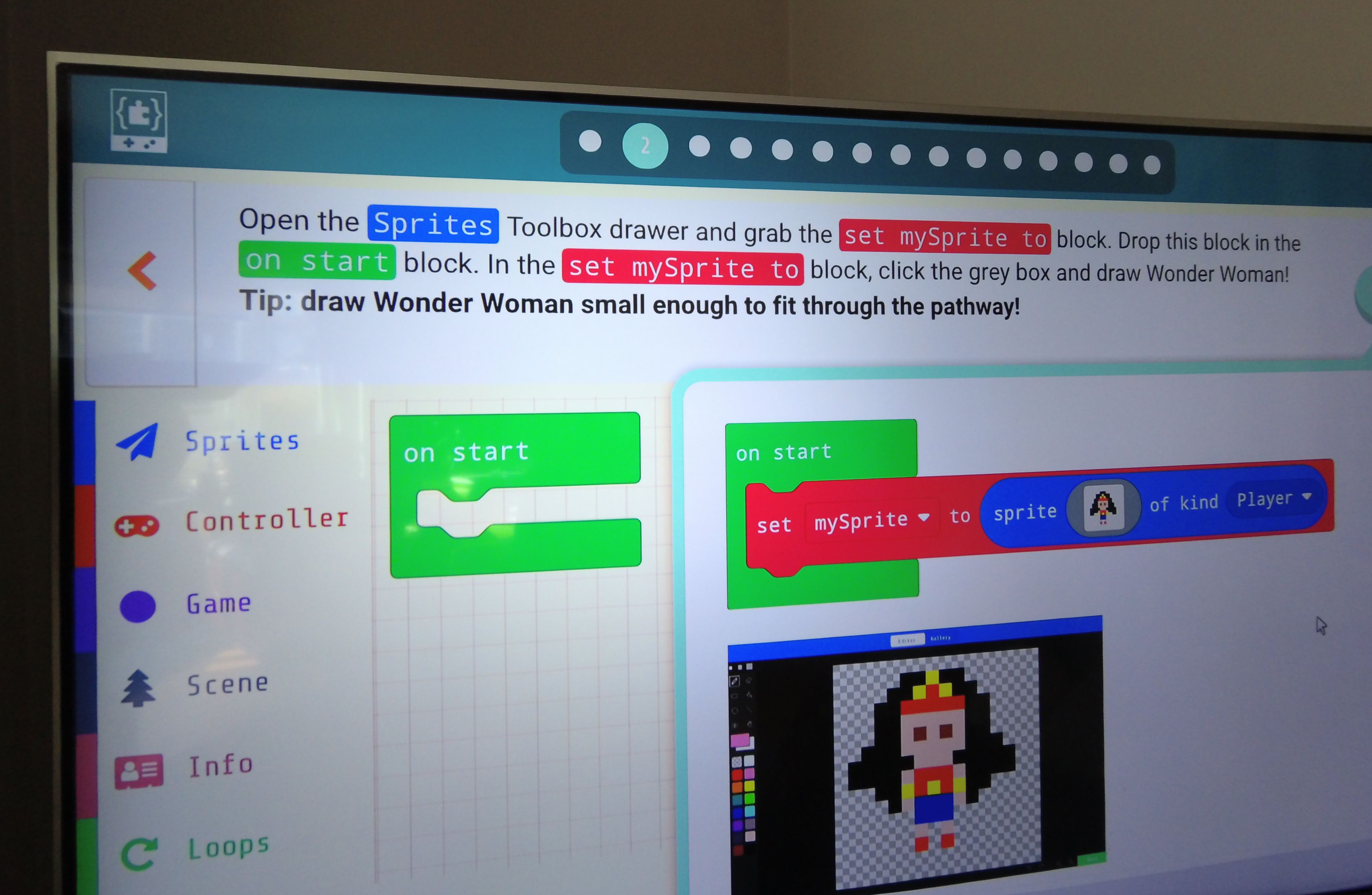 You want even more? How about a full-blown Linux environment on your phone where you can run Python. Node.js and a ton of other standard software development tools? You can even build and run a web-server on your phone! And interact fully with GitHub etc.

To do this, you need to install Termux. This taps into the underlying Linux kernel on your phone to provide a protected “old-school” command line environment. It’s crazy good!

But this comes with a big warning. Termux is no longer available on the Play Store for technical reasons. You need to use an alternative additional app store called F-Droid. If you are not comfortable doing that, stop here and just enjoy all the other features I’ve listed above. If you are comfortable, install from the link above (after enabling “allow installation of apps from unknown sources” on your phone). 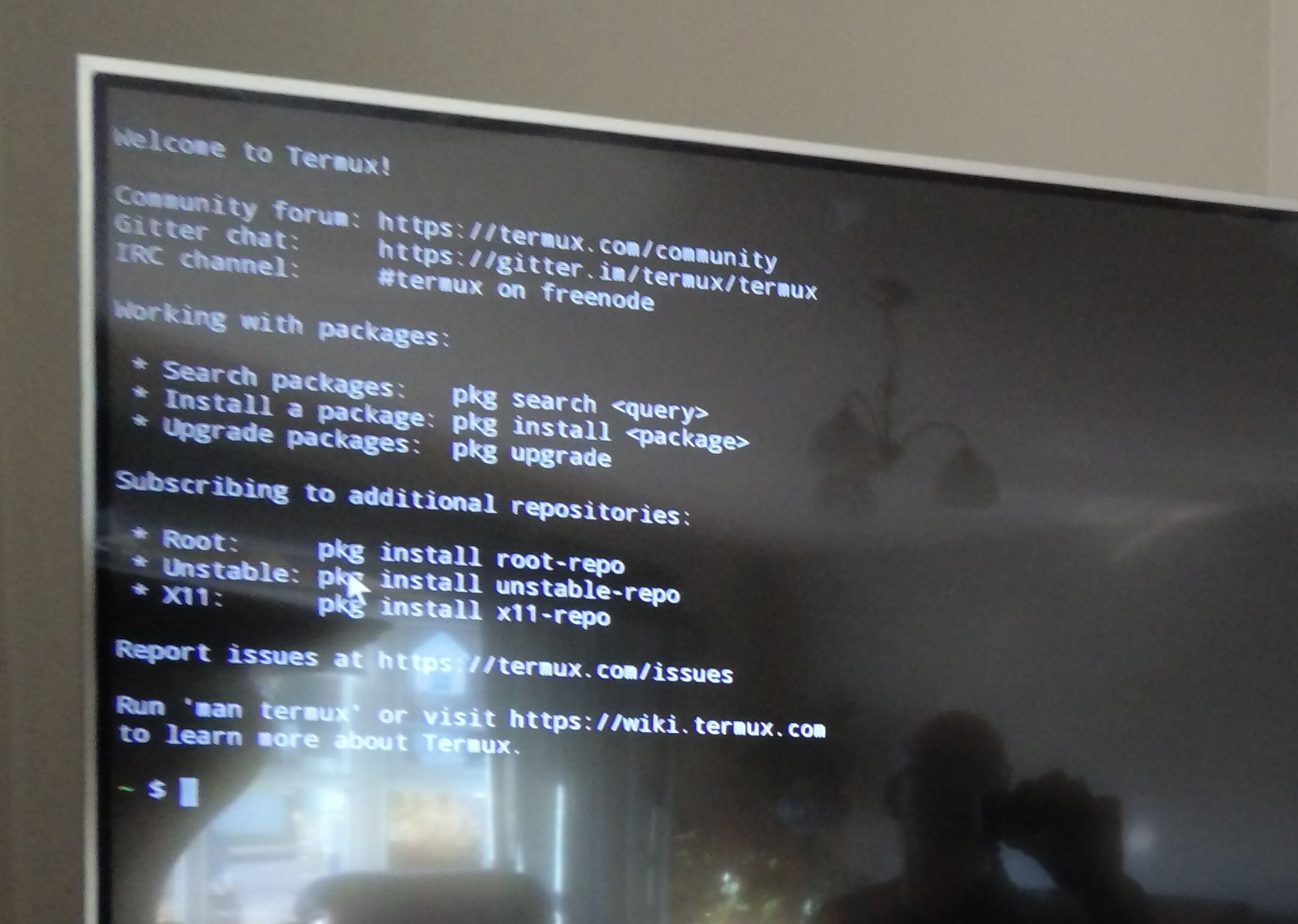 You can then run the Termux terminal and install Linux apps using commands like:

I won’t dig into any more details on that but suffice to say that the classic node.js hello world web server can be implemented and run on your phone. Which is mad. 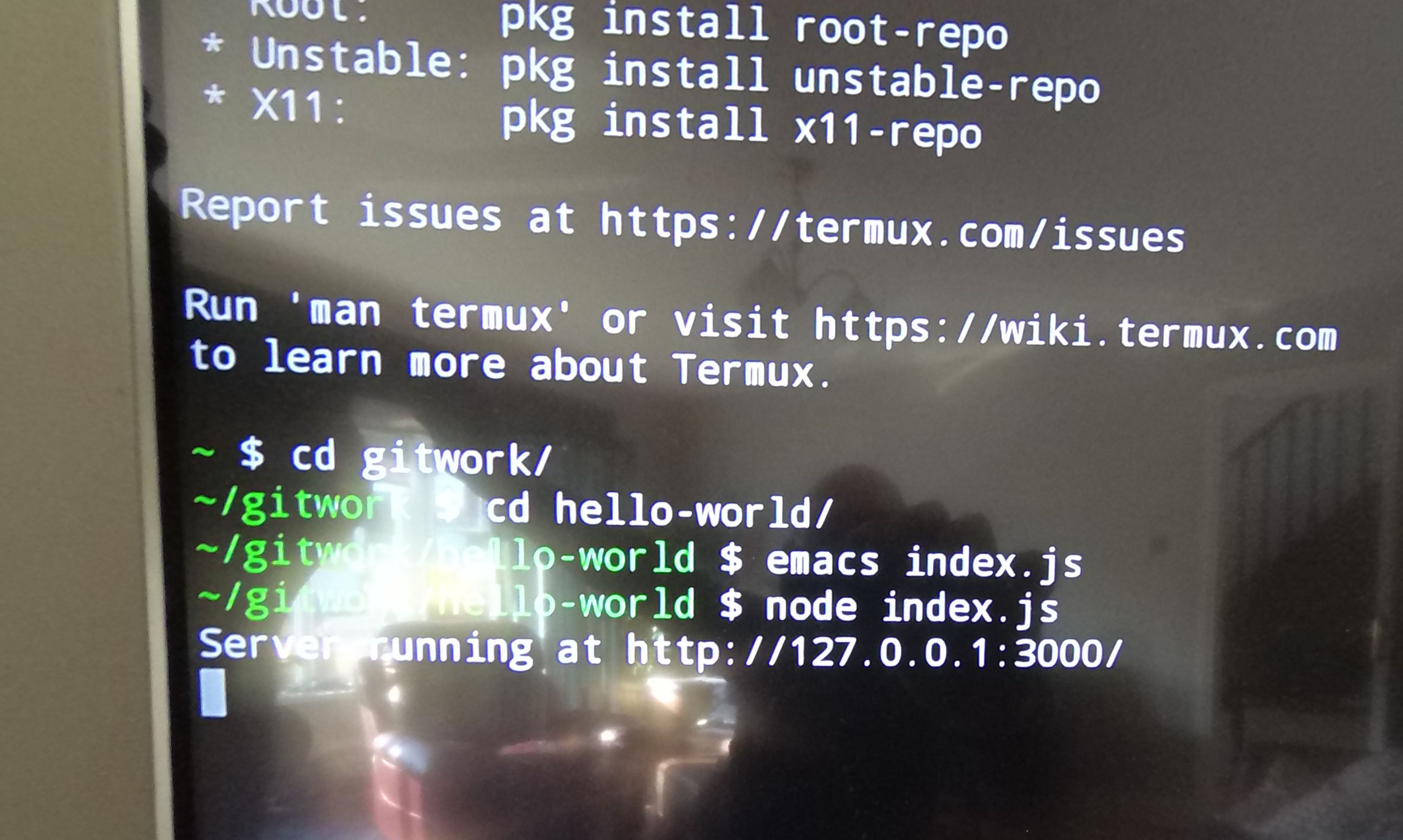 Or run the legendary text editor, GNU Emacs, which I first tried on a multi-thousand-dollar Sun Workstation in the 90s.

But but but what about iPhones?

It seems to be possible but I haven’t done it. This adapter looks like what you need. It provides HDMI and USB connectors for £25 and can probably be used with a cheap combination wireless keyboard and mouse.

There is also a Termux type app for iOS called a-Shell which lets you run Unix commands on your phone.

Let me know if you try it and it works for you.

I’m not going to claim this is the ideal solution to anything but it’s an option for some people and it’s also a fun experiment to see what’s possible with devices that maybe spend most of their time on Twitter, Snapchat or TikTok.

If you find it useful, if you have any questions, or if you know of other interesting things like this that are possible with phones, let us know.