I was so pleased when I heard Flahavan’s was getting into the oat milk market. As the most famous porridge brand in Ireland, it seemed like an obvious move.

I only turned plant-based in January 2020 and switched to oat milk pretty quickly as I preferred, and still prefer, its taste to all the other plant milks. Having Flahavans as an option along with the usual Oatly, Califia, Minor Figures and Alpro means I can now finally support Irish farmers again with my cuppa tea and coffee.

Obviously Flahavans don’t have the marketing budgets of the others which you can see by its lowly position on the supermarket shelves as they can’t do the same level of kickbacks that global CPG firms can. What, you thought they put the best products at eye level?

So they’ll need to do some dodging and weaving to grow their market presence here and then do a Baileys on it into the UK and US. I think the bright busy branding on the cartons helps for a start.

Here are my couple of ideas, coming from someone in the target demographic, not as someone who knows anything about the food industry.

Despite Irish garages coming on in leaps and bounds since the advent of breakfast-roll guy, they still have some huge gaps in their offerings, particularly for vegans, veggies and anyone with an intolerance to frytex :-)

Whilst things are generally good in the food courts of the big motorway services during the day, it’s a complete catastrophe before 9am and after about 6pm. I have yet to find one on the M7/M8 that does plant-based milk when there isn’t a barrista on duty. And it’s even worse for food - try getting a vegan sandwich or similar when Subway, Chopped and Zambrero are closed. And forget McDonalds completely until the McPlant arrives in 2022.

As a step 1, could Flahavans provide oat-milk and branded insulated metal jugs for free to all the garages on the M7/M8/M9/N25 as a trial? So there would be no coffee/tea machine changes needed. It just becomes another option along with the low-fat ones some of them offer in jugs. There’ll already be massive brand recognition in general because of porridge. 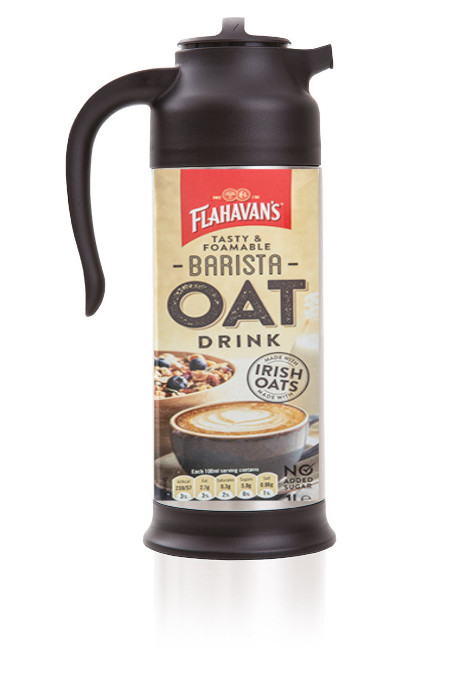 Because of the dire plant-milk situation outside of big cities in Ireland, I’ve taken to bringing full tetra-packs of oat milk with me to hotels. I also have some much smaller soy and oat cream ones in my car, which are unfortunataly too large for single-use and are cream not milk. They work for when I’ve done a long off-road run and know I’ll be pulling in to a rural garage/cafe/horse-box.

I’ve done some googling on miniature oat-milks but only managed to find one. It’s Danish and they brilliantly have done it with the old 1970s UHT triangular packaging. Flashbacks to the campsite shop in Barleycove as a kid.

Think of all the hotels around the country with the crappy UHT milk miniatures or the Lakelands plastic tubes of milk. If the hotels were all convinced to provide artificial sweetener years ago, then oat milk miniatures should be a no-brainer.

From an environmental perspective, I’m not sure if anything biodegradeable is available but that would obviously be preferable.

Please also sell these as multi-packs in supermarkets so I can bring them on planes too. Oooh planes!!!! Calling Ryanair and Aer Lingus.

Option 1 requires no changes to anything you are doing in production apart from ordering some branded flasks. Option 2 is obviously a bigger ask but feels like a gigantic opportunity.

You’d have me as a customer for life if you followed through.